I use Tvheadend as TV streaming server and recently encountered the problem that I couldn’t change the adapter’s settings any more. Two of three tuners missed the option „Universal LNB only“ and only one tuner was used by Tvheadend. Before that I set one tuner as master tuner because of the fact that I only had one free cable to the LNB. This is a restriction in the classic satellite signal distribution topology because only one tuner of the three available is able to control the polarisation and frequency range sent through the cable.
Anyway, now I have three cables for three tuners and wanted to change the settings. 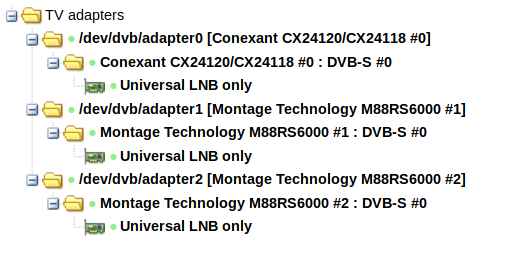 Because of missing the Option „Universal LNB only“ in two of three cases, I wanted to reset all adapter settings but it seems that Tvheadend does not allow this. The solution was provided by a posting in the Tvheadend forum: It was neccessary to delete the adapter configuration files in /home/hts/.hts/tvheadend/input/linuxdvb/adapters/.